Nerja is a town of around 20,000 inhabitants, situated just fifty minutes from Malaga on Spain’s Costa del Sol, which has successfully preserved its essential Andalusian character. Surrounded by mountains and stunning beaches, the town has an ideal climate, with an average annual temperature of 20ºC. Agriculture, fishing and tourism are the main productive sectors. Although its history harks back as far as the Palaeolithic, the town owes its name and origin to Moors, i.e., «Narixa» in Arabic means “abundant spring”. The warm, extroverted nature of the locals, traditions such as Carnival, Holy Week, patron saint feast days and festivities, and the town’s proximity to major cities (Malaga, Granada, Seville), make Nerja an ideal place to learn our language and get to know our culture.

The Prehistoric Caves of Nerja and the small white-washed villages in the environs are worth visiting for their cultural interest and special charm.

As Nerja is a coastal town on the Mediterranean, all water sports are within your reach, as are tennis, swimming, horseback riding and hiking, all of which are compatible with our intensive courses.

You can also take advantage of your leisure time by visiting the town’s restaurants and bars, which serve the regional specialities, or enjoying our traditional art form, flamenco. Indeed, Nerja offers visitors a great atmosphere, as well as a superb range of places to eat, cafés and services catering to all tastes. 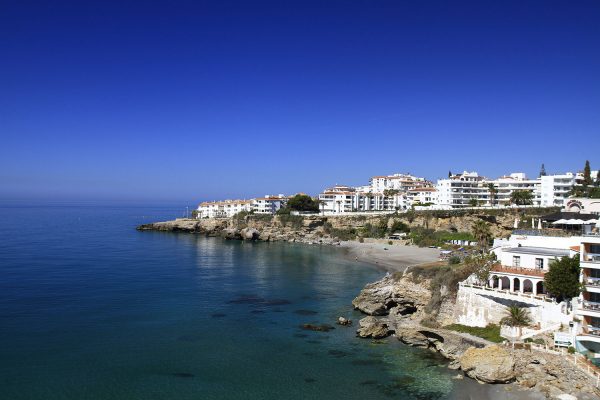 Nerja and tourism: guide of things to see, do and where to sleep

At Nerja Language School we know every corner of this charming town of Malaga so that in addition to learning Spanish in Spain, you can enjoy every secret of one of the best towns on the Costa del Sol.

Nerja is a fishing town in Spain that borders the province of Granada, where the mouth of three rivers meet: the dry river, the honey river and the chillar river, and which enjoys more than 300 days of sunshine a year.

The municipality of Nerja, has a total of six towers, these, in the past were used as defense towers, being located in the coastal area. Nowadays the Macaca, Maro or Calaturcos, Pino and Caleta towers are in a good state of conservation, while the tower or Torrecilla de Nerja, the Rio de la Miel, are practically destroyed by full.

It is an ideal gateway to Europe for a vacation, sightseeing and even diving for much of the year to learn the secrets of the Mediterranean.

Although, it is not the only activity that can be carried out on the coast —with 13 kilometers of coastline—, since through a boat trip or a Kayak excursion it is possible to admire the beauty of the Costa del Sol.

Activities and excursions in and around Nerja

If you decide to come to the town, and stay in one of the hotels in Nerja. In addition, to taste the typical dishes and the best flamenco, you can also visit the natural places, such as the place of Maro or Cerro gordo, in addition to the natural park of the Tejeda and Almijara mountains, or the well-known Cuevas de Nerja.

The caves of Nerja

This enclave of archaeological interest, discovered in 1960, is located in the district of Maro and 158 meters above sea level. This Cultural and National Heritage, listed as a Site of Cultural Interest since 2006, is characterized by its cave paintings, one of the oldest in Spain.

Treasure that shares its place with one of the largest columns in the world thanks to the fusion of stalactites and stalagmites in a single pillar, and which witness the representations that take place in the interior theater for the Nerja Cave Festival. Not surprisingly, it has 4,823 meters of surface.

Nerja breathes the Andalusian essence like no other locality, not in vain, the cradle of flamenco boasts of The Nerja Carnival, the festival of San Juan, the Virgen del Carmen, and the Nerja fair, among many other celebrations.

What to do and what to see in Nerja

The Malaga town offers a multitude of activities and places to see and enjoy: from the Nerja museum or the Puente del Águila to the Barco de Chanquete or the Balcón de Europa, passing by the old supply market of Nerja and its beaches.

It is an aqueduct to supply the San Joaquin sugar factory in the 19th century. It is listed as a Property of Cultural Interest. It is possible to visit it in the ravine of the Coladilla de Cazadores de los Acantilados de Maro.

Also known as the Balcony of Europe, it is a small building on a promontory on the remains of the fort of the Bajo de Nerja castle, erected in the 9th century. This viewpoint offers a panoramic view of the sea and Africa and the coast of Nerja in the center of Nerja.

It houses a wide collection of archaeological, ethnographic and historical documents

Located in the historic center of Nerja, it is the epicenter of different cultural events.

Church of the Savior

Built at the end of the 17th century, its structure was modified several times throughout the centuries until the final restoration carried out in 1997.

Created in 2001 in tribute to the Verano Azul series, it is made up of the Chanquete boat, a playground and an activity area.

The replica of the ship called La Dorada, was one of the protagonists of the series was recorded in Nerja during 1980. That is why it is not possible to access the interior.

Belonging to the 17th century, it was located outside the town. Now it’s in the center. Inside it presents images of the apostles.

With more than 70 on its back, today it is a place dedicated to exhibitions. One of the most famous is the one dedicated to Marisol, born in Malaga on February 4, 1948.

In tribute to cultural diversity, it was created with 25 different stones from two countries of
the European Union.

It has shallow waters, dark sand and composed of gravel. It is recommended to bathe in it with booties, It is located right at the mouth of the Chillar river.

Its sand is dark because it is made of gravel. It is the location that served as the setting for some episodes of the Blue Summer television series, and is located at the foot of the balcony of Europe.

It is one of the three most famous beaches in Nerja. In addition to a blue flag, it is a great place to practice water sports. In addition, it has a spectacular promenade in honor of Antonio Mercero, producer of Verano Azul.

It is a nudist beach that can only be reached on foot.

Its dark and thick sand is as characteristic as the flora and fauna of its waters. It is ideal for kayaking and even for a drink after a session in the sun thanks to its beach bar.

It is located in a Natural Reserve Acantilados de Maro.

It is made up of two coves located between the Alberquillas beach and the Torre del Pino. The perfect place to dive and snorkel.

Discover the activities and excursions in Nerja that you can do with us.

You can also see our Spanish course’s activities program.

We also have accommodation in Nerja, so you don’t have to worry about a thing.

And, of course, Nerja’s map and How to arrive Nerja.